The world’s biggest student entrepreneurship competition is challenging US leadership. 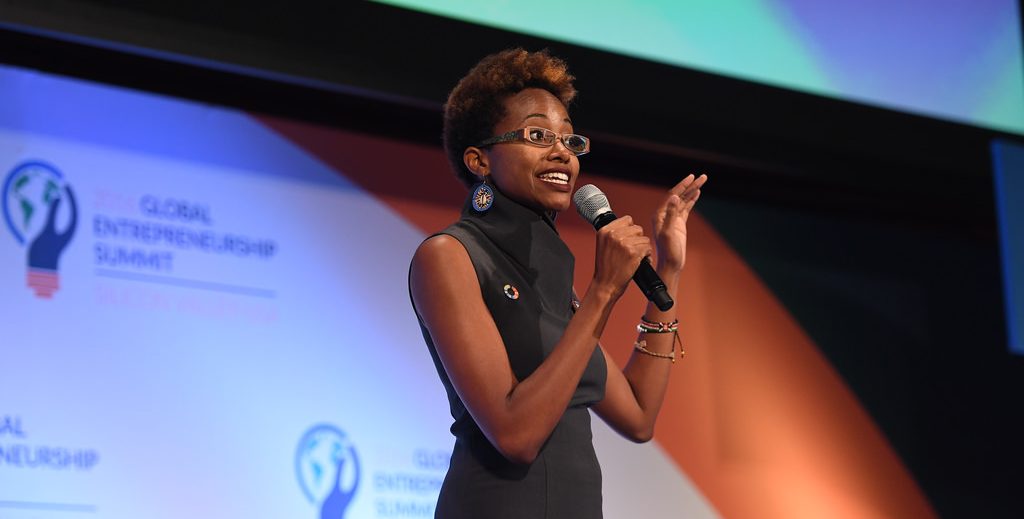 In 1956, William Shockley moved to Mountain View, California, where he founded Shockley Semiconductor Laboratory - one of the earliest computer technology companies. Shockley was unique in his designs in that he believed that silicon was a better material for making transistors - during the time, germanium was the common material. Shockley Semiconductor Laboratory's research led to breakthroughs in silicon transistor technology. In 1957, some of Shockley's employees left the company to form Fairchild Semiconductor. Two of these original employees of Fairchild Semiconductor, Robert Noyce and Gordon Moore, went on to found Intel in 1968. And the rest is as they say, history. Silicon became the base of all transistor technology, and Silicon Valley was born as the leading technology hub in the world.

Today, Silicon Valley is far more than just a place where computers and silicon chips are made. Silicon Valley has become eponymous with American innovation and entrepreneurship. It has led to just about every other major metropolitan area trying to replicate the success of the valley. In more recent decades, the US entrepreneurial ecosystem has grown across the country, peaking in 2006 with 715,734 new startups launched, according to the Bureau of Labor Statistics. Then the Great Recession of 2007-2009 put a dramatic dent in the meteoric rise of the startup ecosystems. Since then, the number of startups launched each year has been back on the rise, nearly reaching the 2006  high with 679,072 startups launched in 2015; however, there remain troubling signs for American entrepreneurship.

First, while the number of startups being launched each year has risen since the great recession, the number of jobs per startup has not. In fact, ever since the dot com bubble burst in 1999/2000, jobs per startup has been declining, bottoming out in 2010 at around 4.5 jobs per new startup launched, and showing no signs of going back up. What does this mean? There are many interpretations, but it may be one sign, that the entrepreneurial ecosystem in the United States is not going to be the economic powerhouse that many expect it to be in the coming decades. 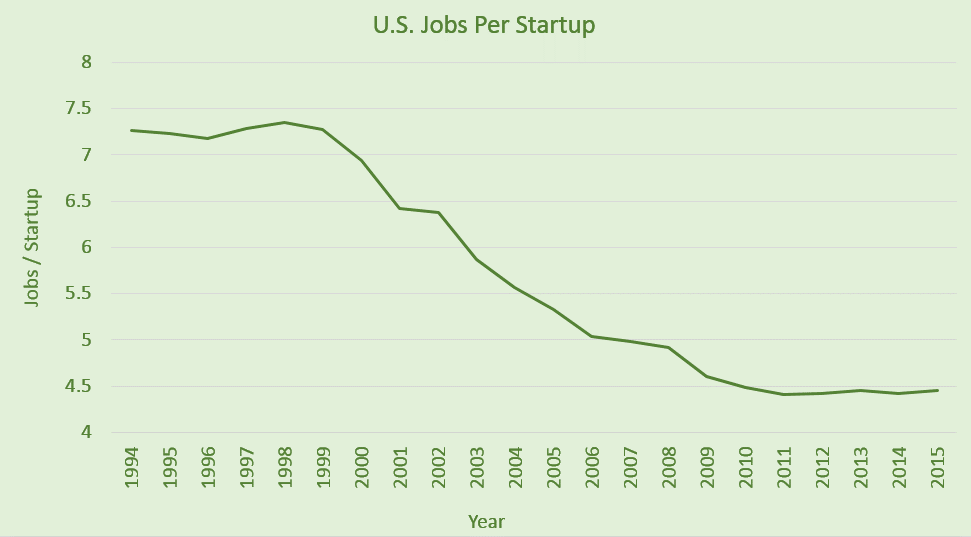 One other troubling sign for American entrepreneurship is from the recent Gallup Hope Index. According to this poll, in 2016 we hit an all time low of only 27% of high school students (grades 9-12) having plans to start a business. This is down from recent years where the number was in the mid to low 30% range. But when you ask the younger generation (fifth to eighth grade) over half want to start a business, the response has been 50 to 55% consistently. 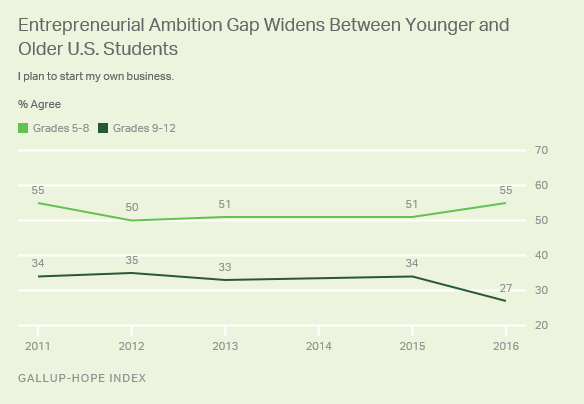 This difference in ambition between age groups has existed for as long as Gallup has taken the poll. Over 50% of younger (middle school age) students have responded positively to starting their own business, while by the time they reach high school, that number decreases to the lower 30% range, and now is down to the upper 20% range. What is unique in the most recent 2016 poll, is the extent of that difference. Never before has the Hope Index been less than the mid 30% of high school students wanting to start their own business. The most recent number is a full 7 points off of the previous average of 34%.

So, what’s happening here? Are students losing that desire and ambition once they get an inkling of how much work it is going to take? Or are they simply moving on to other interests? Whatever the case may be, if the American educational system doesn’t figure out a way to keep the entrepreneurial spirit alive in today’s youth, others may take over as the world’s top innovation space for the next generation of world-class entrepreneurs. And in fact that’s what many are trying to do.

We may expect with the head start in entrepreneurship the United States has had, that we should also have the largest student pitch competitions. And while these university competitions have hefty awards and a fair number of student competitions (The Rice Business Plan competition boasts $1.3 Million in cash and prizes to winning teams), unfortunately, this doesn't come close to the sheer number of participants in the largest competition who are now learning how to build their own startups. So who’s the biggest? Probably not who you would expect.

Launched only three years ago in 2015, the “China College Students' Internet Plus Innovation and Entrepreneurship Competition” dominates over other student entrepreneurship competitions across the globe. With more than 1.5 million students from 2,241 universities and colleges participating (according to the Chinese state news agency Xinhua), this Chinese competition is far and away the largest entrepreneurial competition by participation.

According to the Chinese Academy for Social Sciences, whatever the government and colleges have been doing is working. From 2011 to 2017, the number of students starting a business upon graduation in China has risen from 1.6 percent to 3.0 percent. In 2017 that meant about 200,000 new Chinese entrepreneurs entered the economy upon graduation.

"Peking University cultivated my entrepreneurship. And central government policy supports an environment favorable for making innovations," says Dai Wei, the founder and CEO of Ofo, a bike-sharing company that raised over $700 million in funding in July (Xinhuanet). The Chinese government has impressed upon educators the need to be better and to even put their theories and teaching into practice. Teachers are even being encouraged to turn their research into a product and start their own businesses.

How successful China’s entrepreneurial push will be remains to be seen, but if nothing else, it shows that there is a strong interest from China in encouraging the next generation of home-grown global business leaders. The launch of a national entrepreneurial pitch competition for college students demonstrates a strong, central drive to accelerate new entrepreneurial leaders. And the numbers are in China's favor. With nearly three times the number of students in colleges in China versus the United States, this may be an entrepreneurial machine in the making.