According to the NEC, Our Next Top Economists Will Be From These Schools.

Whether you think money is the root of all evil, or that it's the pathway to happiness, one thing is for certain, a strong knowledge of economics will help you gain and retain your money. Unfortunately, our education system doesn't have a strong national economics program, and most students won't be introduce to much economics until they go to college. But one program is changing that. Each year, The Council for Economic Education hosts the National Economics Challenge (NEC). This high school economics competition is where America's students go to show off their knowledge of how our world turns.

Year in and year out over 10,000 of the nation’s brightest young minds test their knowledge of economic principles and how well they can apply them to real-world scenarios. NEC Participants are split into two divisions, the Adam Smith Division and the David Ricardo Division. The Adam Smith Division is for advanced placement, international baccalaureate, and honors students. The David Ricardo Division is for ‘semester general economics students’ taking part in the contest for the first time.

If you’re interested in getting involved, you’re going to be up against some stiff competition. So you better bring your "A" game! Here’s a look at the overall Adam Smith division winners – the Varsity division for the NEC.

Over the years, a few high schools have built economics programs that regularly put them in the top placements of the NEC. This is a testament to the long-term commitment from these schools. But each year there are also underdog schools who make it into the top 4 placements – schools that have not placed before, or are not regulars on the podium. Belmont High School in 2012, Richard Montgomery High School in 2013, Grissom High School 2014, Lexington High School 2015, Choate Rosemary Hall in 2016, and both Thomas Jefferson and Chattahoochee High Schools in 2017. All of these schools have shown up on the podium just once (with the exception of Choate Rosemary Hall making it in twice). This shows that there is a great opportunity for young teams in the NEC to step up and take on the tops!

Again we see some regulars making it into the top placements of the David Ricardo division, just like with the Adam Smith varsity division. Some schools seem to have worked out an excellent system of engaging young students in economics materials. These schools – like Carmel High School that has placed a team in the top 4 for five out of the last 6 years – continue to turn their younger students into strong economics masters.

So, what does this mean for you? Who should participants in the 2018 edition of the competition be on the lookout for? The easy answer would be to say the teams that won last year, but nothing in economics is that easy. To understand a little more about who the top of the tops are in each division, let’s look at the ICS Badge points for each school over the past 6 years (If you need a refresher on the way Badge Points are structured check out the Award Points rubric here). A first place award provides 1000 points, 2nd place 750, 3rd place 500, and 4th place 250. Runner ups and 5th or higher placements provide 100 points each, but we don’t have those for the NEC.

Here’s where things stand in the Adam Smith Division: 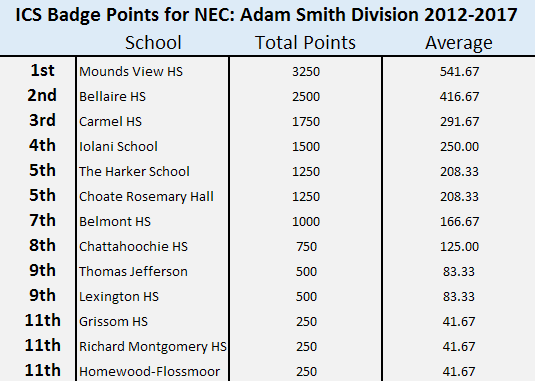 And the ICS Badge Points standings for the David Ricardo Division: 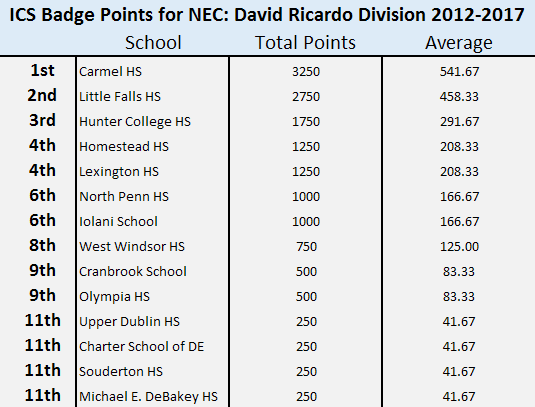 These three school appear to be the most serious contenders based on historical performance, but participants in the Adam Smith Division would be wise to keep an eye on the top four teams from the David Ricardo Division from 2017. If there is anything the top teams in a lower division like to do other than win, it is move up a division and win again. Don’t be shocked to see them make some noise in 2018.

Two other teams worth mentioning are The Harker School from San Jose, California, and the Iolani School in Honolulu, Hawaii. The Harker School has had a team in the top four in three of the last six years. So while they may not always place high, they clearly have an established program.

The Iolani School took first in 2013 and third the year after, but hasn’t appeared in the top four since. However, they have placed inside the top ten. So, there is an established program with capable individuals. Overlook them at your own risk.

If you haven’t already done so, check out more about the National Economics Competition, and follow along with all the ICS news and updates on over 500 academic competitions by setting up your free account!