These are the High Schools Preparing the Next Great Rocket Scientists.

Its not unusual to hear about a family moving long distances so their kid can play football or basketball for a better school. If they believe their kid has elite-level talent but might not catch the eye of college coaches because their current school isn't competitive, moving can make a significant impact. Families on the athletic track will stop at nothing to get their kids the best opportunities to play for the top colleges.

But what if your kids are more likely to be on the “academic” track than pursuing a career as a professional athlete? Far more of us are likely to have successful careers by gaining knowledge and skills in academics than we are in becoming the next Tom Brady or Kevin Durant. Parents might not regularly move across the country so their kid can attend a school with a better academic reputation, but its not uncommon for them to scout out school districts to see which ones are better than others. If your kid has a knack for science, technology, and math, going to a school with programs that foster and nurture that knowledge can mean a lot for their future. More and more families are even moving to different neighborhoods based primarily on the strength of their school districts!

Unfortunately, it can be difficult to judge the true strength of a school district based just on report cards and standardized test scores. How would it look if we evaluated Football or other sports this way? What we need is to be able to differentiate schools based on real performance in specific academic scenarios. If schools participate in nationwide academic competitions - just like they do in sports - it becomes a bit easier to understand where its academic strengths really lie. We decided to do this with one industry and see what information we could glean about the high schools and states at the top of their game helping to prepare our kids for successful college and career opportunities.

The aerospace industry includes some of the brightest minds in the country and according to business insider, it has one of the highest median job salaries out there at $145,000. With over 68,000 jobs in the sector (according to the Bureau of Labor Statistics) your kids are much more likely to be successful at an aerospace career than professional sports.

So, our question is how can we determine which high schools, school districts, or even states are better for budding aerospace engineers? We can start by analyzing performance in national competitions like the Team America Rocketry Challenge. Our team at ICS spent a little time reviewing the past decade of Team America Rocketry Competition (TARC) performances to see if there were any trends that stood out.

This is not entirely unexpected. Many of the states with the most top 10 finishes have at least one of two things going for them, if not both. Either (a) they include a large aerospace hub in their state (i.e. Texas is home to NASA’s Johnson Space Center, Florida is home to Kennedy Space Center, and Alabama has Marshall Space Center), or (b) they are simply a more populous state with more schools competing (Texas is #2 in terms of population size, PA is #6, CA is #1).

What stands out even more when you consider these two factors are the states where neither of them exist. We then might attribute their strong standing in TARC even more to the exceptional performance of the schools and teachers themselves. Three states, Washington, Missouri, and Wisconsin fall into the category where they do not have strong aerospace sectors and don’t fall into the top 10 most populous states - WA is #13 most populous, MO is #18, and WI is #20 (Michigan straddles the edge of being in this category at #10 most populous).

Does this mean that the educators in Washington, Missouri, and Wisconsin are simply doing a better job teaching their students about aerospace and rocket science? Maybe. Maybe not. But it probably means that at the least, they’re doing more with less help from expert mentors in the industry. Should you flock to these states if you want your kids to become aerospace engineers? Probably not. Having the support of a strong industry sector nearby also plays a big role by providing more opportunities for students. 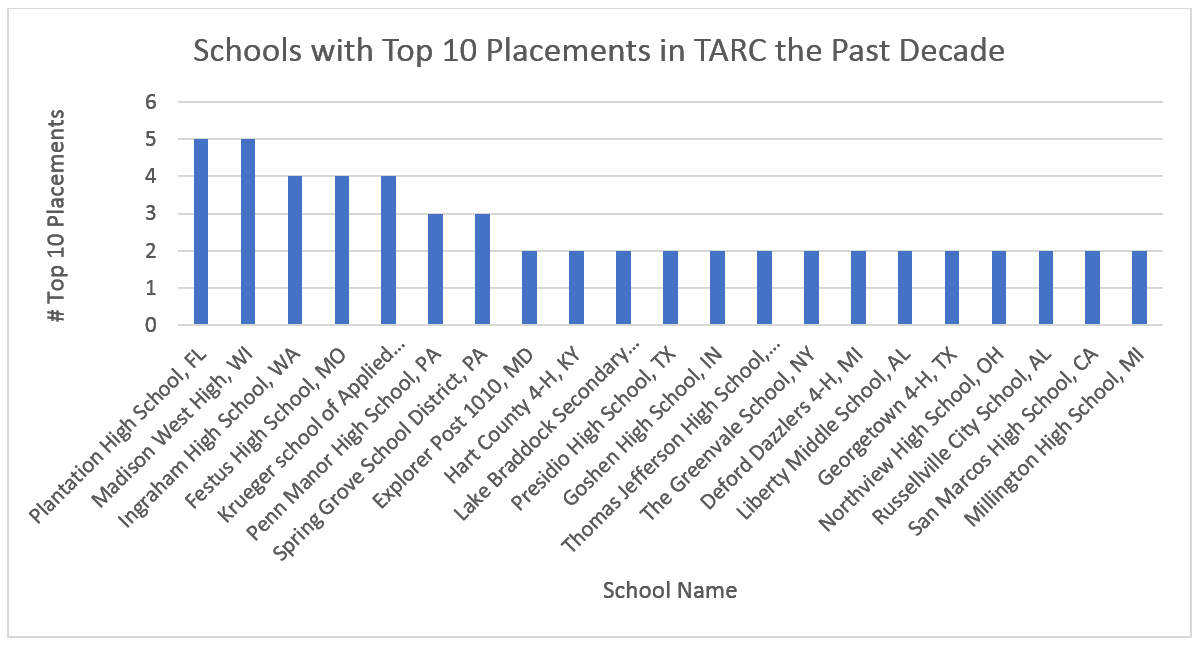 Becoming the Next Great Rocket Scientist.

So what does all of this mean if you want your kids to become the next great rocket scientist? Should you plan your move to a new state for a new school? Probably not. What may be the most important thing to take away from this brief analysis of Team America Rocketry Contest is not necessarily the specific schools finishing at the top of the ladder, or even the states with the most top 10 finishes. What matters most is to find a school that participates. You cannot learn to be the next great rocket scientist if you aren’t in the arena testing your skills.

According to the TARC website, more than 5,000 students participate in the competition each year. While this may sound like a large number, consider that there are 15.1 million high school students in public schools (according to the National Center for Education Statistics) in the United States.

So if you have kids interested in aerospace, NASA, or rocket science specifically, and you have some flexibility with which schools they attend, make sure to check in with them on if they participate in TARC and the other great academic competitions that can help your students get ahead. If they aren’t already participating, make sure they’d be willing to get a team started if your kid attends the school. Simply getting in the arena and letting your kids compete to test their skills is the most important thing you can do to help them get ahead in the college and careers of their choice! Don't let them miss out because their school isn't even in the game.

Check out more information about TARC and other related competitions on the ICS Competitions Database.

The Team America Rocketry Competition (TARC) is the world’s largest student rocket competition. Students are required to design, construct and fly their own rockets. This academic challenge draws an estimated 5000 students each year; with the top 100 teams invited to compete in the National Finals, in Washington DC. Being such a high-octane competition, there are always some exceptional performances. If you're interested in rockets and the next generation of aerospace engineers, you'll want to follow the students in this competition. Get your free ICS account to stay up on all the action in TARC and over 450 other educational competitions!

Each year, new innovative designs are brought to the table in the Team America Rocketry Challenge. So we thought it would be interesting to review placements from the past 10 years to bring you our top five most interesting TARC rocketry performances.

When Madison West High School from Madison, Wisconsin pulled their rocket out of its bag, everyone thought the same thing - no way that will get off the ground! It was the most cumbersome, and clunky rocket of the year. Weighing in at a whopping 1310 grams, no one had high hopes for this whale-like Rolls-Royce of the sky. However, all in attendance were forced to eat their humble pie and watch in amazement as Madison West's beast effortlessly soared to an average height of 745 feet in an average time 42 and a half seconds. Their final score of 20.54 saw them take away gold in the most unlikely of victories!

Whether it be the Superbowl or the America’s Cup, every highlight reel from the sporting archives has one of those moments where athletes or teams flounder at the crucial moment. The TARC final of 2015 was no exception. Team FOXTROT, from Ingraham High School, Seattle, Washington had achieved an almost unbeatable first flight score of 1.00 (the lower the score the better). That score was significantly better than any competitor and a second flight remotely close to that would ensure victory. However, flight two was essentially a disaster. With a score of 36.00, Team FOXTROT fell from grace and an almost assured first place trophy to third position; allowing Russellville City School, from Russellville, Alabama to take gold. One lesson to take home from this - its never over till its over.

We can’t talk about the biggest missed opportunities without talking about the fairy tale comeback story. Such a story came out of the 2008 final. After flight one, Enloe High School Team 2, from Raleigh, North Carolina seemed to be well off the pace with a flight one score of 17.64. This put them in 14th position after round one. Statistically speaking, it seemed impossible that Enloe High School Team 2 would get on the podium. However, they totally blew all statistical and expert predictions out of the water with an unbelievable second flight, that scored 6.30. To put that into perspective, the next closest flight 2 score was 14.26. Enloe High School Team 2 finished with gold, well clear of the second place team. The showed how a little determination can turn even the worst situations around.

Creekview High School Team 1 is a team that is firmly fixed in the minds of adoring fans from the state of Georgia. From 2008 to 2014, a team from Georgia had only placed in the top ten once; with Lambert High School Team 2 from Suwanee, Georgia finishing in tied second place in 2011. Consequently, no one really had high hopes for any of the Georgian teams in the 2014 finals, or any after that for that matter. However, spectators were stunned as Creekview High School Team 1, from Canton, Georgia took first place in 2014 with an outstanding final score of 14.88. There was only one other team from the state of Georgia that finished in the top 50 that year. Incidentally, that team finished 49th and were also from Canton, Georgia. Just because it hasn't been done before, or at least not in a long time, doesn't mean it can't happen now!

Number one on our ‘Top Five TARC Performances’ fittingly goes to the TARC 2017 National and World Champions - Festus High School from Festus, Missouri. The past decade of competition had been a series of ups and downs for Festus High School. Having finished 2nd in 2009, 8th in 2011 and 3rd in 2012, Festus High School seemed to be on a winning trajectory and would surely soon be national champions. However, a 13th place in 2014 took the wind out of their sails. Then having not even entered or qualified for the national finals in both 2015 and 2016, it seemed Festus High School’s glory days were over. That was, of course, until their stunning performance in this year’s final, with an exceptional podium topping score of 13.36. Not only that, Festus High School also took home gold at the International Final in Paris. Certainly, an amazing tale of tenacity and determination and rising from the ashes.

Get in the Arena.

So that’s it for this round of our ‘Top Five TARC Performances Over the Last Decade.’ What will the 2018 season bring? One thing we can count on is more stellar performances, so stay tuned. Don't forget to stay up on all the action from TARC, other rocketry competitions, and over 450 student challenges with your free ICS account! If you're not in the arena yet, signup today!