Has the new TARC Champion changed the power rankings in student rocketry?

With nearly 5,000 students competing in the Team America Rocketry Challenge (TARC) in 2019, it is certainly not an easy feat to make it to the national finals, let alone make it into the top 10 award winners. This year’s competition did not disappoint in excitement. We saw familiar faces in the top tier of the competition again, but there were also a number of newcomers to the podium.

Two years ago we posted our first analysis of the TARC landscape in which we highlighted a few high schools for the number of times they’ve been on the TARC podium (among other interesting facts). With a new ICS award points system in hand to help us analyze the overall TARC state and school standings, it's time to update our Team America Rocketry Challenge Power Rankings!

A quick update on our award point system. For national programs like TARC, we place numerical values on the top awards that lets us compare the overall rankings over the years. A first place finish earns a team 1000 points, 2nd place 750, 3rd place 500, 4th place 250, and placements between 5th and 10th place earn 100 points.

We look at leaderboards from both a state perspective and a school perspective. A basic way to conduct a ranking is by the sheer number of Top-10 finishes. For example, in our previous post, for the decade from 2008 to 2017, Texas led the pack with 14 Top-10 placements. After two more years, Texas still leads in the overall decadal count of the number of top 10 placements, but their lead has gone down having just 12 placements now. All-in-all however, analyzing a state's or school's "power ranking" just on the number of times they’ve had a team in the top 10, doesn’t really do it justice. That’s why we created the ICS award points system, to give credit where credit is due. Teams with higher placements earn higher points.

Another important criteria in our updated analysis is the timeframe. Analyzing results on a ten-year timeline doesn’t make a lot of sense for educational programs. Students are in school for 4 years, so we should examine how the rankings change in four year chunks! To do this, we’re analyzing four-year averages of each state's or school's award points. This allows us to analyze the relative power ranking for a state or school in each four year chunk.

For our State analysis, we took the overall ICS award points earned by teams in each state and averaged them during each four-year period from the last decade. This demonstrates the strength of the state’s TARC teams during that period based on how highly they placed each year. The graph below shows the results of this analysis. 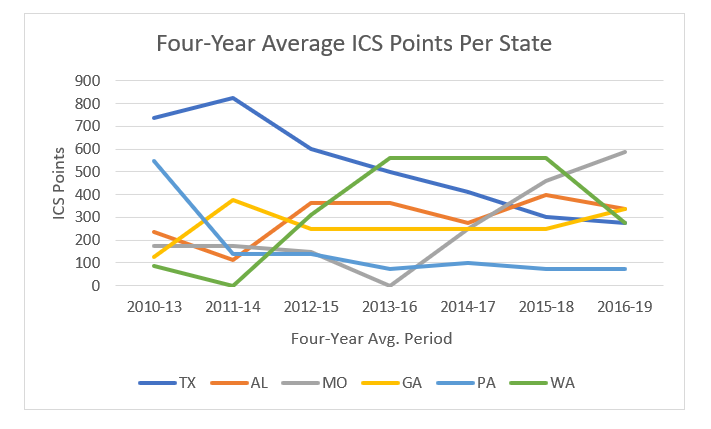 There are a few interesting points we can pull from this:

Second, Washington led the pack in the middle of this decadal period, but things changed after the 2019 TARC finals!

Missouri was weak in the first half of the 10 years, but has had strong teams on the podium since 2017. And with the most recent 2019 competition, Missouri has taken the lead from Washington State as the most dominant state in TARC! Congratulations to all the students in Missouri helping upstate the rest of the pack! Now the question is, can they hold the number one ranking next year?

Being the number one ranked state for the year is great and all, but it doesn’t tell us as much detail as most of us want about the rankings. We want to know what schools are on the top! Of course, it’s easy to say that the teams with the first place award are on top. But when we look at a school’s staying power over the four years (or more) of a competition, a different picture can emerge. So lets see which schools have been dominant for each of the four year periods over the past decade! 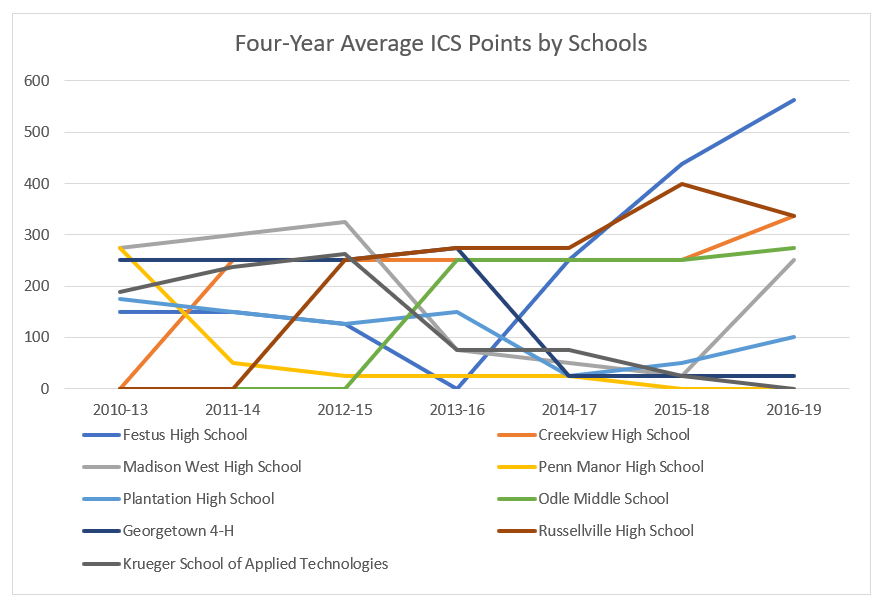 In a competition as intense as TARC, it is hard for an individual school to stand out over multiple years. Each year we crown the first place finishers, but being in the top 10 year after year is hard. In the chart above, you can see that as a number of schools keep jockeying for power year after year, and few are able to hold a commanding lead over our four-year analysis periods. While this chart may be difficult to pull a lot of information from just by looking at it, there are a few high schools that have been able to stand out in our overall power rankings:

Honorable Mention: Plantation High School – while never reaching quite near the top of the pack, it's noteworthy to mention this school for its sheer staying power on the TARC leaderboard. No other school has had as many Top-10 finishes over the past decade as Plantation High School (with 7 Top-10 finishes, and 2 just in 2019). If they can start to refine their program to reach more 1st through 4th place finishes, they will be a powerhouse school to watch out for indeed!

#5 Madison West High School – this school has had a monster of a season, taking the #1 trophy home! And while it may seem odd that the first place school isn't also first place in the Power Rankings, we can understand this a bit better by seeing that they're just coming back on to the TARC top 10 stage having been absent from 2016-2018. But they have been here before in a major way. Like Creekview, Madison West High School is now in the elite club of having two top TARC trophies! They were leading in the four-year power rankings from 2013 to 2015. After winning 1st place in 2012, they stayed in the top 10 for the next three years making them the ONLY team to have a four-year run in the TARC top 10 (Festus will have a shot at joining them next year)! If Madison West can maintain their top 10 performance next year, they will be vying for the top spot in our power rankings!

#4 Odle Middle School – this school is something you would not expect. For one, they're a middle school! Being years younger than many of their competitors means it is no easy feat to reach the top tier of award winners. Odle Middle School not only has been in the top 10, but they have been a #1 team (taking the first place trophy in 2016). Even though they only came in at 8th place in the 2019 awards, they are definitely a team to watch for the 2020 competition, coming in at #4 in our rankings.

#2 (tied) Russellville High School - while Russellville hasn't taken home the first place trophy since 2015, they have hit the top 10 leaderboard 3 out of the past 4 years (including taking 2nd place in 2019 and 3rd place in 2018). In fact, Russellville High School is one of just four schools to hit the leaderboard 4 or more times! This demonstrates both staying power, and an ability to take the top award, making them a key team to watch out for next year.

#2 (tied) Creekview High School – this school is in an elite group. It is one of only two schools that have managed to take the 1st place trophy more than once! However, because of the extended period between their top awards, their power ranking never spiked as high as it might have. Creekview High School hasn’t had the regular staying power like Plantation High School demonstrated, but they have shown a power to hit the top, more than once! Furthermore, they were one of just two schools that had more than one team place in the top 10 this year! If they can stay on track in the coming years, they will be in the hunt for the #1 spot in our TARC power ranking!

#1 Festus High School – the likes of this school’s recent powerful presence on the TARC leaderboard has never been seen before. No school has had so many high-level placements in a four-year period as Festus High School started in 2017. From 2017 to 2019, it has been in one of the top three places each year, taking 1st place in 2017, 2nd place in 2018, and 3rd place in 2019. Over the past three years, the students at Festus have achieved something no other school has - a three-year run in the TARC top-3. Now the question is, can they maintain their run and extend their power in 2020 with another top tier finish? Or is their powerful reign trending out after 3 unparalleled years?

As with every competition, it is impossible to predict what will happen next year. While any of these schools could continue their dominant performances, there are thousands of others striving to knock them off the pedestal. Each of these schools (and the hundreds of others in the TARC finals) should be recognized for their amazing rocketry performances this year and before. But who will be America’s #1 rocketeers in 2020? While the safe bet will be on one of the 6 teams above, it’s anyone’s game!

Register for next year’s TARC competition on their website.

And keep track of TARC activities on your free ICS Account!