Pennsylvania Wins the LifeSmarts Trophy for the Second Year in a Row.

Rivalries. Every sport has them. Everybody loves to watch them play out. Whether it’s the Steelers and the Bengals, the Golden State Warrior and the Cleveland Cavaliers, the Flyers and the Penguins, or if you’re an Australian Rugby League fan like me, Queensland and New South Wales; there is nothing more rousing than an adrenaline fueled clash between rivals.

But there are also other healthy rivalries brewing where most of us might not expect them – in academic competitions.

Let’s just say, residents from the state of Pennsylvania now have something additional to boast about. Students from Dallas High School, Pennsylvania, under the guidance and leadership of Coach Kevin West, took out the 2017 LifeSmarts academic competition for the second time in a row; in front of an adoring home crowd in Pittsburgh, PA; another twist in the tale between two rivals who have dominated the championships over the past 5 years.

There have been just two states that have consistently been ranked in the top 5 for all of the past five years – Florida and Pennsylvania. 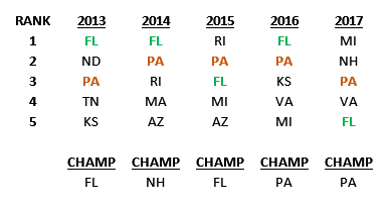 It also just so happens, that Florida and Pennsylvania have each taken home the championship trophy twice during this same period.

LifeSmarts is the ultimate consumer challenge; focusing on five key topic areas: consumer rights and responsibilities, the environment, health and safety, personal finance, and technology. During the academic competition season, initial clashes are held online, with the highest scoring teams being invited to an in-person live national championship.

In the LifeSmarts Competition, teams are seeded based on their carry over scores. The number one seed for the 2017 finals, with a score of 905 points, was Michigan; followed by New Hampshire (866), Pennsylvania (864) and Virginia, with the top five seeds being rounded out by Florida (779).

As expected, the number one seed, Michigan, cruised through the Round of 16 and the Quarter Finals with wins over Georgia and Delaware respectively. However, they were surprisingly defeated in the Semi-Final by the 4th seed team from Virginia. Pennsylvania’s rival, Florida, also fell victim to Virginia on their run to the 2017 final round.

Things were also heating up on the other side of the bracket. The 2nd seed, New Hampshire, was astonishingly knocked out by the 15th seed North Dakota. With the 2nd seed out early, and the favourites eliminated in the semis, it was clear that this year’s LifeSmart trophy would not be going home with either of the teams that most expected to win.

Pennsylvania made light work of Massachusetts, Illinois and Rhode Island on their way to the Final against Virginia. But would Virginia, the giant slayers put the stop on their illustrious home coming? State against state, mate against mate, in an arm wrestle for the LifeSmart championship.

With the home crowd behind them, Pennsylvania took it 225 to 195 in the Final; elation filling the hearts of the Dallas High School team as they secured back to back titles for their state, and matching rival Florida with two championship wins under their belt.

So, if you’re a resident of Pennsylvania, or you support one of the many Pennsylvanian sporting teams, feel free to boast, and brag. Not only did Pennsylvania take home the National Hockey League’s Stanley Cup the last two years in a row, they also took home the LifeSmart Championship Trophy thanks to the students from Dallas High School. Now the big question is, who will get to the hat-trick first!

And with the NFL season opener fast approaching, who knows, maybe the students from Dallas High School can help inspire the Steelers or the Eagles to glory in next year’s Superbowl.

Whatever happens, we’ll be watching the next season of LifeSmarts to see if the rivalry between Florida and Pennsylvania heats up even more! And don't forget to signup with ICS to stay up on all the action from across the world of academic competitions!