Mock Trial Dynasties: the best schools of the past 20 years

In its 35th year in 2019, thousands of students across the US competed for the National High School Mock Trial Championship. This makes reaching the national tournament no easy task, and it continues to get more competitive each year. Despite the intense competition, over the years some schools have managed to make it to the top 10 placements multiple times. We examined the past 20 years of the National Mock Trial Championship award winners and found some interesting trends in the awards that highlighted a few dynasties of the past 2 decades. Over the years, the Mock Trial Championships have seen many amazing performances, but among all of these, there have been a handful that stand out over the years.

Since the 2000 championship, there have been a total of 105 schools that have made it into the top 10. Each of these schools is to be commended for their excellent performance; even more impressive are the schools that have been able to do this more than once. Just 44 schools have been on the Mock Trial top-10 podium twice or more since 2000.

What we really want to know are which schools have had “dynastic” runs on the podium? To do this, we must first define what we mean by “dynasty.” For our purpose here, to be considered a dynasty a school must have appeared in the top-10 for at least three years in a row, and they must have had at least one of those years in the top 3 places. With this definition in mind we identified 10 Mock Trial Dynasties over the past two decades and a handful of other honorable mentions. The chart below demonstrates their 4-year staying power averages as a mark of how powerful the dynasty was. 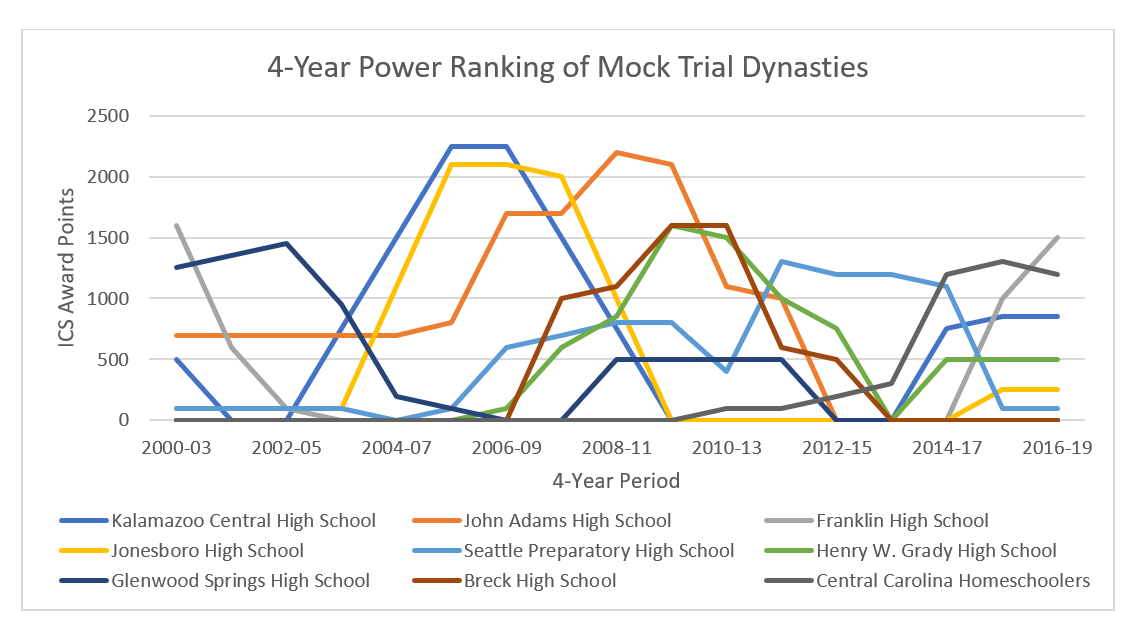 This chart paints a good picture of how dynasties have shaped up in mock trial over the years. Here's our list of honorable mentions, and the top dynasties ranked by their overall powerful performances!

One final interesting piece about Mock Trial Dynasties is that as of the 2019 National Championship, there are two schools poised to launch new dynasties with the 2020 competition. Both Franklin High School (1st place team in 2018) and Agathos Classical School (1st place team in 2019) could reach official dynasty status with a top 10 placement in 2020. These schools traded places from 2018 and 2019 competitions taking first and second place each year. A 1st or 2nd place finish for either team in 2020 would catapult them all the way to a tie with Kalamazoo Central HS for the #2 ranked dynasty!

Of course there are hundreds of other teams vying for those top spots. We'll have to wait until next year's tournament to see if they can do it. Or if other schools will start a run towards their own dynasties!

We’ve all been there. It’s late in the evening after a long day of work, but you can’t relax yet because your significant other just doesn’t get it. You lay out the facts of your case, going through the logical step-by-step reasoning, but you still end up arguing for hours. You try different angles. You get angry. You calm down. You get angry again only to finally throw your arms up and leave the argument in a huff of frustration! Why won’t she (or he) understand the perfectly sound logic of your reasoning! Of course going to the football game is more important than going shopping next weekend!

Arguments and disagreements are everywhere in our lives. A 2011 survey conducted by home insurance company Esure noted that couples end up arguing (or “bickering” in their terms) on average 7 times a day. We will experience arguments regularly throughout our lives in both personal and professional settings. However, not all arguments are alike. Some may have grand consequences, while others may barely have an impact on our future. Knowing which is which can be an art in and of itself.

Unfortunately, traditional schooling does not do much to teach our students how to approach arguments. There is a whole field of social psychology on arguing and debate. Luckily for us, starting as early as middle school, our students can join debate clubs and tournaments to pick up this valuable skillset. As with many academic competitions, students will often have to join the club as an extra-curricular program – even though the skills learned on a Debate Team may have more direct real-life impact than many others in their formal curriculum.

Debate competitions do more than teach your students about public speaking and how to make an argument; they help with the development of critical thinking and research skills, and allow students to both form their own opinions and learn how to critique and analyze those of others. Getting into debate competitions can be daunting, especially for students (and teachers) who don’t have a lot of experience participating in them. So we took a little time to research some of the common tips for preparing your students for their next debate. If you’re considering getting involved in debate competitions, or just want to understand ways to prep for your next spat with your sig-fig on what to do this weekend, check out these tips to help students win in debate!

Half the battle is behind the scenes before even stepping up on stage. The best orator can fall short if their research is lacking and they don’t know their facts. A well prepared argument can make all the difference. Confidence can only take you so far, because a large part of debate is about the power of your content. Chris Wakefield, a former debator, says in Debating Matters that “if you are already prepared for some responses, then you won’t be wrong-footed as easily.”

The average high school student has yet to perform in-depth research, and might not be very skilled at even knowing what research to do in order to prepare for a debate. Try some scenario writing where the students dive into each different argument their opponent might make, and research the facts behind those arguments Taking the time to build up this academic skillset can be all the difference not only in the debate competitions, but in future real-life arguments as well. Focus on training students about what background is most necessary to be able to counter each opposing argument. Knowing what questions and arguments your opponent might make ahead of time will take away some of the surprise during the debate itself.

Prepare for the Unexpected

Almost all of us will be caught off guard at some point in our lives. This happens more often than not in debates as well. Students cannot always research every possibility that your opponents will throw at you. At some point they will be hit with a fact they had never heard of, or a counter argument that they never considered. Luckily, there are ways we can prepare for these situations as well.

A great way to address this is to present your students with a scenario, withholding a fact, and then introducing the fact just moments before they have a practice debate. This forces the students to improvise their responses – to think on their feet. This approach is similar to one used by the Upright Citizens Brigade, a training center for improv acting. They emphasize the need to “move the scene forward” without hesitation—to ignore any hiccups and push through them. Students will need to be able to react and respond to new, unforeseen information in a timely and well organized fashion. Taking a few lessons from improv classes wouldn’t hurt either!

Put Them in the Ring

It can be easy to spend countless time teaching your students about debate. However, there comes a point where words fall short. Commit to setting up practice sessions with your students sooner rather than later. Be sure to take the time to critique their performance and offer tips for improvement and you’ll see a massive change in their performance. Don’t believe us? Research from the University of Tennessee shows that experiential learning results in increased confidence, self-efficacy, content knowledge, and critical thinking skills. So don’t spend too much time simply researching the case. Put your students up in mock-arguments, make them test each other out!

Build a Strong Sense of Camaraderie

At the end of the day, debate is a team competition. Students will remember their practice sessions just as much as the competitions, and colleges will be more impressed by their drive and teamwork than any medals they earn. More and  more we hear from college admissions officers that it is about demonstrating the effort, not the specific awards that catches the eye in making a decision whether or not to admit a student. As a Debate Team coach, make sure to spend time building relationships, doing icebreakers, and ensuring that your students are bonded to each other. As you progress through the season, pair up students randomly so they don’t work with just their friends. This will help the entire team become a seamless unit and lead to greater success.