One state is dominating Future Problem-Solving! It’s not who you’d expect.

Each summer a distinguished group of global change-makers comes together, tasked with solving some of the world’s most challenging problems. But they aren’t the world’s top politicians or business moguls, they’re the top high-school problem-solvers competing for the Global Issues Problem Solving (GIPS) competition in the Future Problem Solving Program International (FPSPI). As they take the stage, a tense silence falls over the conference center. The crowd of thousands waits to hear how the speakers propose tackling global problems including everything from environmental disasters to cyber security to the fast-paced changes in technology and growing inequalities in society.

The Future Problem Solving Program International’s Global Finals gives the next generation of critical thinkers a chance to test their skill at solving all kinds of challenges. Students from around the world are presented with the daunting task of solving future problems ranging from desertification to the treatment of animals to artificial intelligence. The 2017 topic focused on bio-security. Each team works out a proposed solution to the challenge, which they pit against the others in a bid for the title of top problem-solver. And trust us, these students are good.

Over the last four years of the competition, one state has far out-paced all others in their ability to produce great problem solvers. And it’s probably not who you expect. We looked at all the results from the Senior Division of the competition (high school level) and analyzed the teams placing in the top 10 each year. What we found was surprising to us - Kentucky reigns supreme in the GIPS.

Yes, a state smack in the middle of Appalachia, one of the most economically impoverished areas of the country, and ranking only #24 on the US News and World Report’s list of PreK-12 education rankings, placed more teams in the top 10 problem-solver spots than any other state at every GIPS competition for the past four years. Not only that, they had more than twice as many as the next contender (Minnesota). 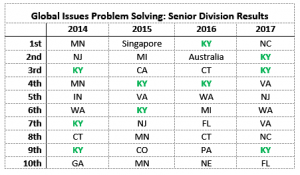 While not always taking the top spot, the Bluegrass State consistently lands between 2 and 3 schools among the top 10 finalists each year – and it’s not even close! Kentucky’s total of 10 top placements over the past four years absolutely dwarfs the next closest total – 4 for Minnesota and 3 each for New Jersey, Virginia, Connecticut and Washington. Setting Kentucky even further apart from the rest of the pack, for the past 4 years they have had at least two teams placing in the top 10 every year! No other state has had two teams in the top 10 more than one year. And not a single other state has had 3 teams make it into the top 10 in any year, like Kentucky achieved in both 2014 and 2017!

Of course, teams from different regions of the country have made their way in and out of the top 10, some with more success than others. Virginia’s Thomas Jefferson High School for Science and Technology and New Jersey’s West Windsor-Plainsboro High School North, for example, have each managed to crack the final a handful of times. But no state has come close to maintaining Kentucky’s ironclad grip on the top spots.

Reviewing the placements from Kentucky and other states highlights the consistently impressive performance of the Appalachian teams. Included below are the figures for the average number of top-10 placements and the ICS badging point totals over the past four years (take a look at our badging points system page if you need a refresher – the badging points provide a way to measure overall placements across multiple competitions): 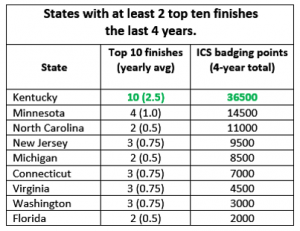 While the rest of the pack is clustered at an average of less than one top-10 placement per year (with MN just squeaking in at an average of 1 per year), Kentucky smashes through that barrier at 2.5, earning more than double the ICS badging points of the closest competitor, Minnesota. What does this mean? It means that not only are Bluegrass State teams ending up among the finalists, they’re leading the pack with more 1st, 2nd, and 3rd place finishes than any other state! A look at the 4-year badging point totals gives us a clear picture of just how handily Kentucky is outperforming the rest – hitting 36500 total points versus the next highest at 14500!

Unfortunately for those of us outside of the Upland South, this dominance shows no sign of letting up. The share of top placements held by Kentuckians has remained consistently strong each year, earning them 13,500 ICS badging points this year. After a stellar performance in 2017 – three top ten placements and two of the three highest point totals, expectations will be high for Kentucky’s problem solvers in 2018. Though most people might point to Kentucky for its history of coal and bourbon, the state should also be recognized as a leading producer of amazing teams of young problem-solvers.

The 2018 Future Problem Solving season is already getting underway as teams prepare for local and regional competitions. We’re watching to see which states might have a chance at stepping up to Kentucky’s high bar in solving our future Global Issues! So stay tuned as the next round of the world’s top problem solvers are crowned.