Is there a new FPS GIPS Power Rankings Leader?

After the 2017 Future Problem Solving (FPS) International Conference, we conducted an analysis of the Global Issues Problem Solving (GIPS) competition. In this, we found that overall, Kentucky had been the most powerful Future Problem Solving Affiliate between 2014 and 2017. Now, with the 2019 FPS international conference concluded, we explored the updated results from the past two years. Has Kentucky continued its powerful presence on the GIPS leaderboard? Or have other affiliates stepped up to challenge them for the #1 spot? What about individual schools? Do any stand out on the FPS podium for multiple years? We examined GIPS results from 2014 to 2019 to help answer these questions.

Over the past 6 years, 20 different affiliates have had teams place in the top 10 of the GIPS scoreboard. Most of these (16) have had more than one team place over the past 6 years. But which affiliates have been the most powerful overall? One thing we can do to identify which affiliates have had the most powerful team presence at the international conference is to look at the ICS award points earned for their top 10 team performances over the years. The ICS award point structure assigns 1000 award points to each 1st place award, 750 for 2nd place, 500 for 3rd place, 250 for 4th, and 100 points each to 5th through 10th place. Here’s how the top 10 affiliate points shape up from the past 6 years of GIPS awards. 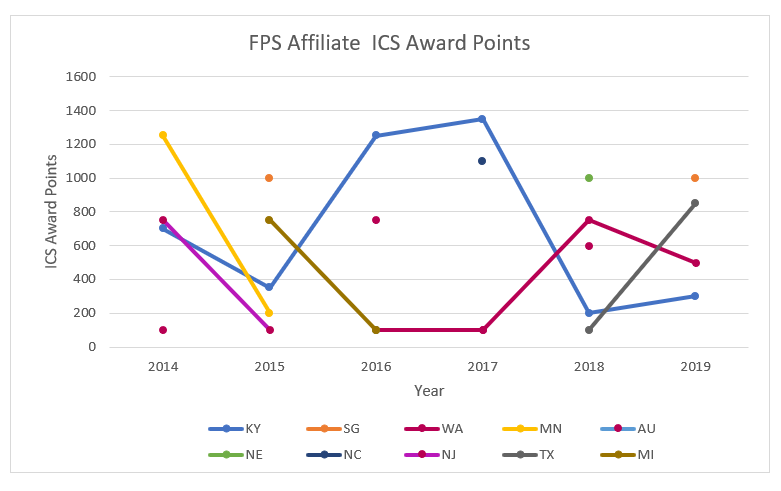 But what do all these numbers mean? Is Kentucky still dominating GIPS like it was at the end of 2017? There are several exciting highlights about GIPS affiliate power rankings that we note from this information.

Though their dominating days of 2016 and 2017 may be gone, Kentucky teams have still managed to extend a record not achieved by anyone else – long-term staying power. No other affiliate has had teams place in the top 10 every year between 2014-2019. Washington comes close, only missing the mark once, in 2015, but Kentucky’s overall placements have maintained their powerful presence on the GIPS top 10 throughout the years – something to be recognized for sure! Another key metric to look at is the number of top 10 placements an affiliate’s teams have had. Over the past 6 years, Kentucky teams have taken 15 out of 60 total spots. The next closest affiliate was Washington with 5 placements. So, while Kentucky’s overall power has dropped from its height (earning lower placements than it did between 2016-17), it certainly has not disappeared.

Over the past two years, teams from the Washington and Texas affiliates have been making their mark on the GIPS top 10 podium. Washington teams have been on the podium 5 out of the past 6 years, but in 2018 and 2019 they were higher ranked than ever before taking 2nd place in 2018 and 3rd place in 2019. But Washington wasn’t alone in the rising star category! Texas broke into the leaderboard for the first time in 2018 at #6 and then had two teams on the board in 2019 coming in 2nd and 5th. Both Washington and Texas are clearly rising powers for next year's FPS GIPS championship!

The Singapore affiliate’s teams have now achieved something that even Kentucky team’s haven’t managed – they’ve had two first place finishes in the last 6 years! No other affiliate has had a team come in first place twice. While Singapore teams have not been able to have a regular showing on the top 10 podium between those placements, this feat in itself is something to be recognized!

While 6 years of data is nice to have, it is a bit arbitrary to use in determining overall power-rankings. A metric we like to use better, is the four-year power. We use four years because typically students stay in their high schools for four years in a row. This provides a good indicator of how powerful the school was over the lifespan of the students at school for those years. When we consider four-year power rankings for all 20 of the affiliates that have placed it looks like this: 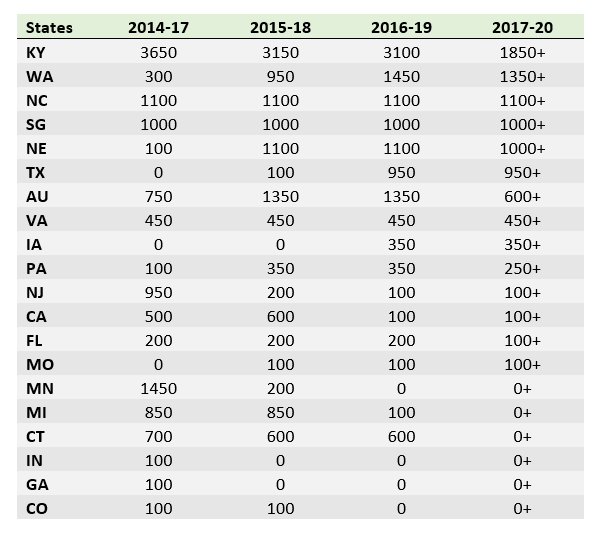 What does this mean for the coming 2020 GIPS competition? It means there’s potential for a shakeup at the top! It is likely that Kentucky will continue to have a presence on the leaderboard in 2020. Over the past two years they’ve averaged 250 points. Let’s assume they hit this average again in 2020. That would give Kentucky a total of 2100 award points for the 2017-20 power rankings. So for the first time in the past 6 years of data, Kentucky would be vulnerable.

Washington is the most likely to overtake the top of the power ranking. The past two years Washington affiliate teams have averaged 625 award points. This would put them at 1975 points for the 2017-20 power rankings, but if they’re able to swing just a few more points they’d be on the top of the board! How could they do this? Here are two realistic ways: (1) take first place in 2020, or (2) earn 2nd place and any other top 10 finish (a single 2nd place award for a Washington team would put them tied with Kentucky for the first place in the power ranking).

Of course, there are lots of variables to consider, and there are many teams from many affiliates looking to make their own mark on the leaderboard and power rankings. So while Kentucky still maintains the top spot on our four-year Power Rankings list in 2019, they’re vulnerable with the upcoming 2020 season! Will Washington or another affiliate's teams take the throne from Kentucky? Will any new affiliates break into the top 10 podium to start a run on the power rankings? We’ll have to wait until next season kicks off to get more information. Until then, we hope this was an interesting ride through some GIPS data and an invigorating look at how some of the affiliate teams are performing over the years.

For more details about FPS GIPS see the website.