Where are America’s Next Global Change-Makers: An Introductory Data Dive with the World of 7 Billion Contest.

In recent years, we’ve seen some amazing millennials graduate college and enter the professional world. Through this generation we were introduced to such global change makers as Boyan Slat, the 23 year old Founder of The Ocean Cleanup, Malala Yousafzai, the young Pakistani activist leading global change in women’s rights through Malala.org, and many others.

With such inspiring young change-makers now leading their own organizations, we started to wonder, where are the next great social leaders going to come from? We know that the millennials and their younger centennial counterparts currently in K-12 schools are generations that care a lot about solving global challenges. As the Case Foundation’s 2016 Millennial Impact Report puts it, “Millennials are looking to effect change and make a difference through individualistic and personally gratifying action.”

Unfortunately, the traditional K12 classroom provides little opportunity for these students to engage with the content of global change-makers beyond a few classroom activities or homework assignments. In fact, according to a 2015 Gallup poll of over 1 million K-12 students in the United States, only half of students feel engaged in school, while a fifth are actively disengaged. About 10 percent are classified as both actively disengaged and discouraged. So it’s safe to say that the traditional classroom alone is not the great breeding ground for our next global change-makers.

Our schools need help connecting students with real-world social-change experiences that can show students they can become the next Boyan Slat or Malala. To help create these important connections, many educators are turning to educational challenges and competitions.

The Institute of Competition Sciences has identified over 35 academic competitions for K-12 students in the United States that actively deal with social-impact. In recent discussions with one of our partners, the World of 7 Billion contest, we wondered how data from academic competitions might be used to help identify where our next global change-makers are coming from. So we decided to test it out with a little data dive from the contest.

Ben Allen, from the World of 7 Billion, helped us take an introductory look at some of their submission information from the past three years to see if we could identify any trends in where students are having the most success in defining their own solutions to global challenges.

In the 2016-2017 school year, roughly 5,500 students participated in the World of 7 Billion (W7B) contest in which middle school and high school students take the first steps in global change-making by producing their own videos addressing a global challenge and offering a self-designed solution. Each year the contest has different themes. Last year, students were challenged to develop videos describing solutions in areas of climate change, rapid urbanization, and ocean health. For the February 2018 submission deadline, students can propose solutions in the areas of: advancing women and girls, feeding 10 billion, and preventing pollution. 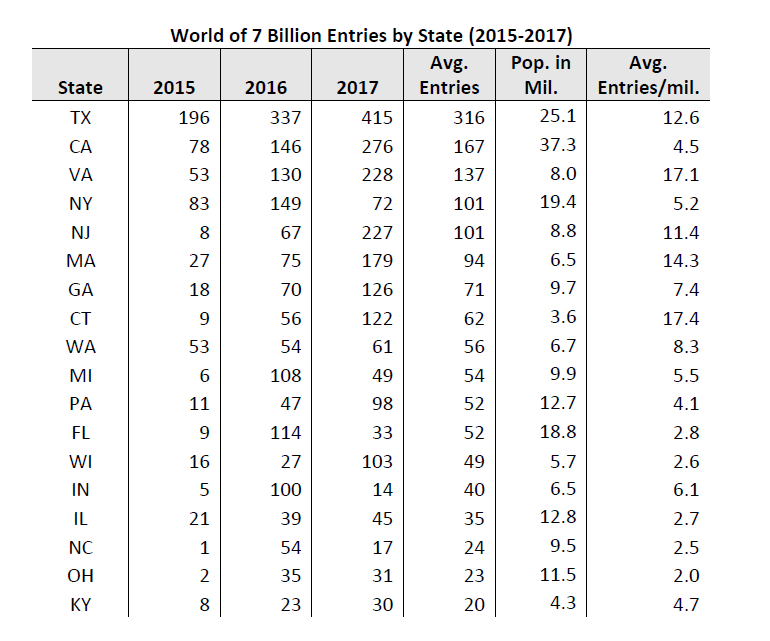 There are a few notable exceptions, particularly Virginia, which has the third highest number of submissions, but falls in the middle of the pack in terms of population, giving it the highest submissions per million population (17.1) of all states except Connecticut.

Of course, just identifying the total number of submissions probably doesn’t have too much correlation to how many students will ultimately go on to be the next great change-makers. It probably correlates much more closely to how many students have actually heard about the competition. To get a better sense of where there might be outstanding work being done by the school and students, we have to look at the awards. Are there any stand-out states in terms of what awards the students are winning? Can we see stand-outs in the number of awards per submissions, or even awards per million population?

For this, we evaluated the last 3 years of the W7B competition and counted how many awards were received in each state. We used the ICS Badging points system to help evaluate how each state was doing based on all of the different levels of W7B awards received. Here’s what we found: 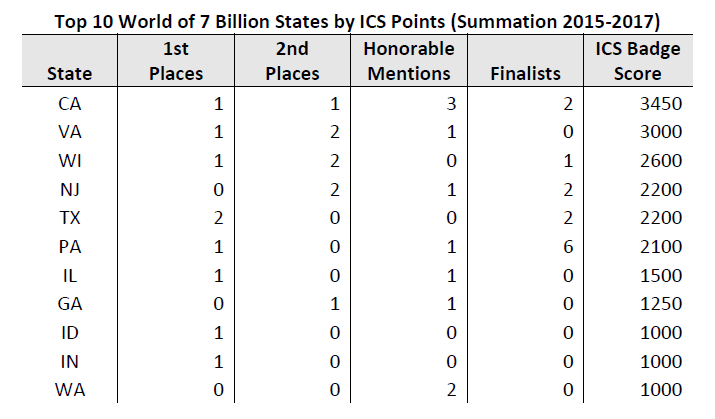 By pure points, California comes out on top. Over the past three years, California students have brought in a 1st place finish, a 2nd place finish, three honorable mentions, and two additional finalist placements totaling 3450 ICS points. Virginia is again in the top placements, close on the heels of California with 3000 ICS points, followed by Wisconsin at 2600 and New Jersey and Texas rounding out the top 5 with 2200 points each.

But still, simply looking at the sheer number of points, doesn’t really tell us if any one state stands out from the “norm.” California has the most points, but it also has the 2nd most submissions, and the highest population. Taking the next step in our analysis, we looked at the points per entry. 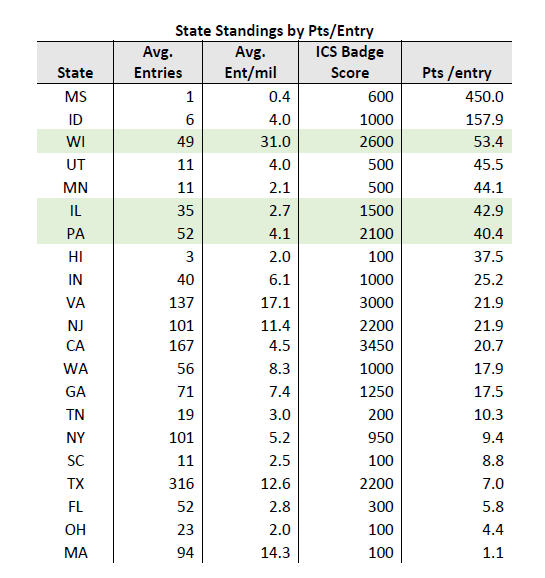 In this table, we’ve included all states that scored points in the World of 7 Billion contest between 2015 and 2017, regardless of how many yearly entries the state had. However, what we should really consider in looking at points per entry, are only the states with a significant number of entries each year. This eliminates states where there were just 1 or 2 entries submitted each year, but they did very well in placing. For example, Mississippi and Idaho and even to an extent, Utah, Minnesota, and Hawaii who scored fairly low in overall points, but because they had so few entries, they come out on top in the points per entry category. It’s hard to say that states with fewer than 10 to 20 entries per year demonstrate a trend in delivering above average numbers of upcoming global change makers.

For the sake of this experiment, we consider an average of 20 submissions per year, to be the minimum for which we can make any relevant inference about above average performance in producing future global change-makers. When we consider this cutoff, we start to see a few standout states.

Chief among them is Wisconsin, followed by Illinois and Pennsylvania. With 49 average entries per year, Wisconsin has a significant base of participation. Wisconsin also comes in ranked 3rd in overall ICS points at 2600. In fact, Wisconsin shines not only in their overall points, but also in both points per entry and points per total population. So in this introductory experiment, we give our outstanding Global Change-Maker Factory award, to … Wisconsin!

What does all of this actually mean? Is Wisconsin destined to produce the next Boyan Slat, or Malala Yousafzai for the United States? Not at all. We must be careful about what we infer from such limited data, this is mostly a thought experiment to start examining how we might use academic competitions to infer larger scale trends. Far more data and deeper mathematical analysis would be needed to make real statistical projections. However, we can say that Wisconsin schools and educational organizations have been great at promoting a connection to global change-making for their students. Will they continue to lead the awards in the World of 7 Billion contest? The chances look good that they’ll at least produce a number of top contenders.