In many academic competitions we have seen domination at the top level by a small group of schools. Recently we’ve been analyzing the national awards for some of the biggest academic competitions to find interesting trends and patterns. One commonality that has shown up regularly is that the top placements of the national awards are filled by high school dynasties. "Dynasty" isn’t usually a strictly defined term, but we’ve been using a three-year run in the top 10 with at least one of those years being in the top 3 as our definition of a dynasty.

Not all the competitions we analyze have strong dynasties all the time, but others seem to be dominated by just a handful of schools. In the Science Olympiad, Troy High School took first place nationally in 5 out of the past 6 years. While with the national Mock Trial Championship, no school has hit first place more than two years in a row. We will leave the discussion of what level of dynasties are good or bad for a competition to another time.

Academic Decathlon traditionally takes the top state winner along with other online national qualifiers for small, medium and large schools. This means that under most years, each state has one state winner and possibly one or two other teams participating at nationals. Decathlon also divides their awards into three categories (Div I, II, III) based on the size of the school (last year they also added a fourth category only for individual winners). They provide a Gold, Silver, and Bronze medal to the top 3 teams in each Division. They also provide a ranking of all of the teams based on their overall score. As we'll see below, the fact that in most years only one team is taken from each state makes national level dynasties more difficult to analyze.

In our analysis we first decided to look at the overall score-based ranking to see what the story of state-wide dominance was at at national level.

In analyzing the dominance based on overall scores we usually put an “award point value” on each ranking and look at how that changes over the years, and examine the 4-year power rankings for the schools like we have with other competitions. However, with USAD the story of dominance is so complete, this isn’t even needed. Dominance at the academic national tournament does come out in looking at individual schools, but even more so than that, it is about the dominance of one state over the others. California owns the Academic Decathlon national tournament (in more ways than one, Academic Decathlon started in California and spread nationally from there). We can see just how complete their dominance is by looking just at the number of top ranks they’ve received (from overall ranking, not separated by divisions). The table below shows the top 6 states from the past 2 decades – 2000 to 2019.

California state winners have won the Academic Decathlon national tournament overall 1st place team 18 out of the past 20 years, and we have to go way back to 2002 to find a national winner from another state. Teams from Wisconsin and Texas are the only ones to manage to take the first place overall rank other than California. To see the trends over time, lets look at the average award points for each state over the years. In the chart below we take the 4-year average for each period during the past 2 decades. 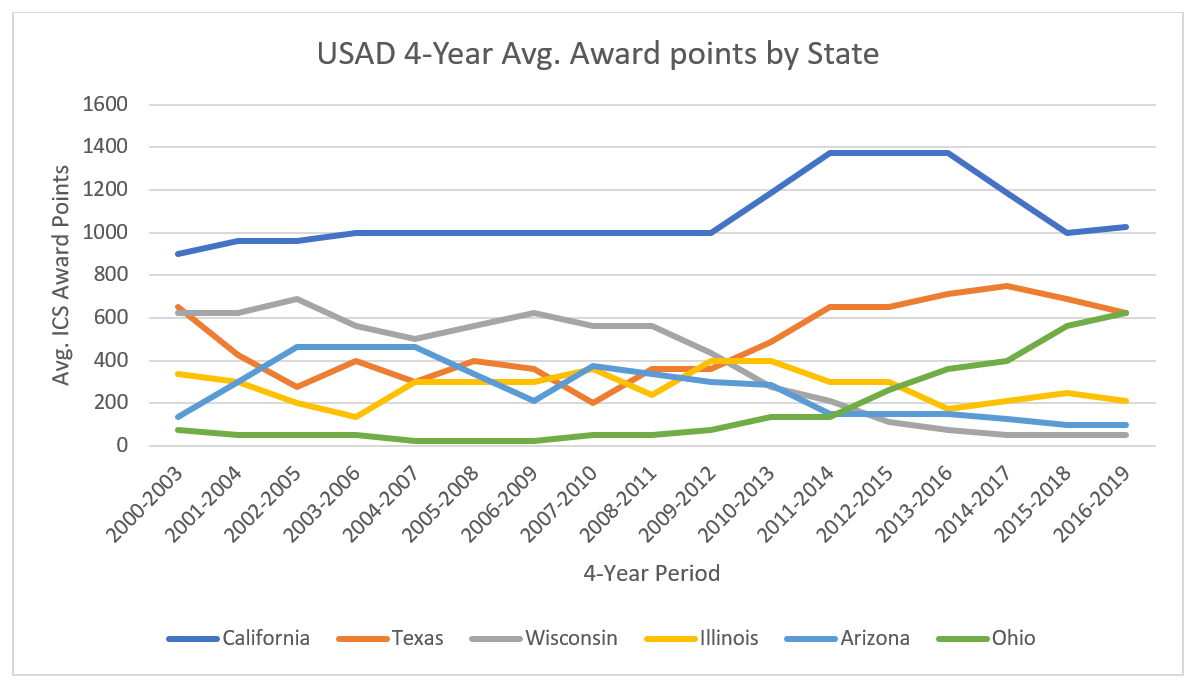 This is another great way at showing the level of dominance that the California teams have had over the national USAD. The bump in the 2014-2016 periods for California is when two of their top teams both went to the national competition taking both 1st and 2nd place. Overall, our key points about state level analysis of USAD include:

The dominance of the California state winners at nationals, makes it a little difficult to conduct a really fair analysis of school level dynasties – particularly for the California schools. California schools overall have been so powerful relative to other states, that regardless of the school they send to Nationals they take 1st or 2nd place. Over the past 20 years, California has sent four schools to nationals as the state champion (as well as several others that qualified through other means). Each one of those schools took 1st place or in just a couple occasions 2nd place. But we can still evaluate schools by their Dynastic power, it’s just that some California schools don’t officially hit “Dynasty” by our definition because of the fact that the state level tournament is so competitive and only one state winner is represented at nationals. 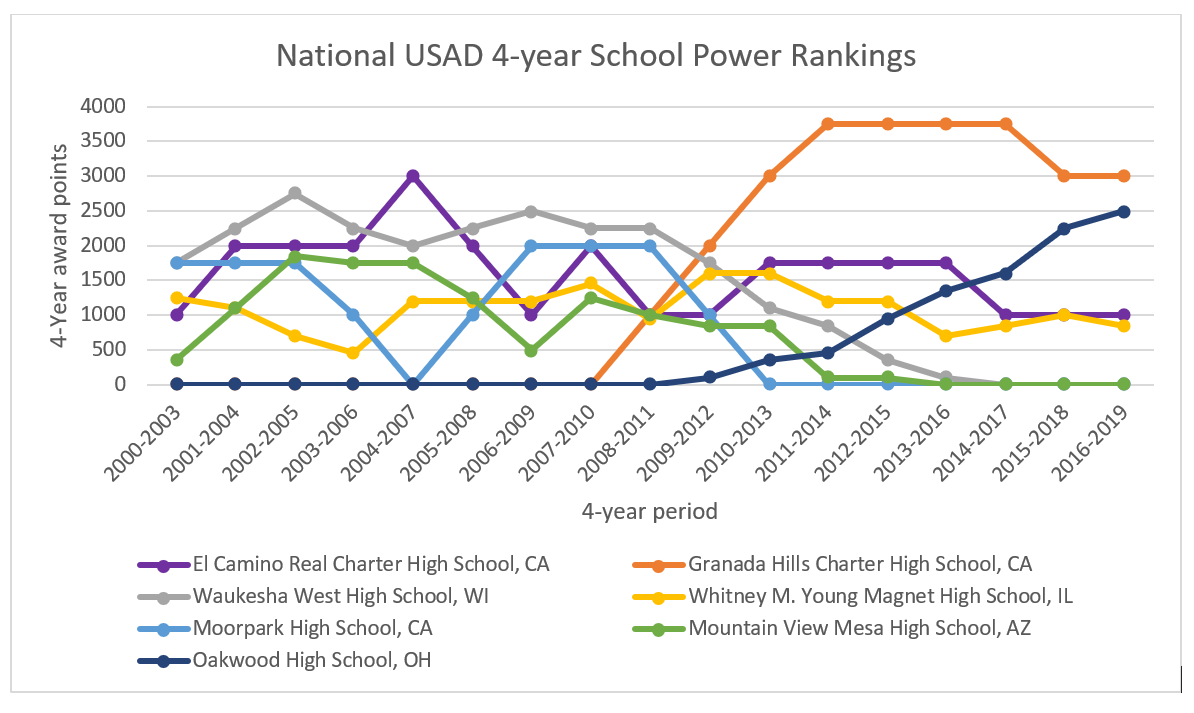 #5 Mountain View Mesa High School, AZ (3200 award points) – this school was a powerful contender at the national tournament in the early 2000s. They hit official dynasty status between 2002 and 2005, and took away three overall 2nd place trophies along with several other top-10 finishes between 2004 and 2010.

#4 Oakwood High School, OH (3450 award points) – this school is the true definition of a rising star. Oakwood High School has been a fixture in the upper levels of the national tournament since 2012. They have steadily been increasing their scores, reaching an impressive run in which they hit 3rd place in 2015, 2016, and 2017, and then managed to move up to 2nd place in both 2018 and 2019.

#3 Whitney M. Young Magnet High School, IL (5450 award points) – this school has been in the top 10 at US Academic Decathlon nationals for 19 out of the past 20 years. A truly amazing feat. With a little more work it’s not unlikely that they could move up to the top spots of the overall national rankings.

#2 Waukesha West High School, WI (6350 award points) – as an individual school at the national tournament, Waukesha West High School has been truly stellar. They have nearly as many award points as our top Dynasty that they have earned from an impressive run of 1st through 3rd place finishes between 2002 and 2009 – a period where they never finished lower than 3rd place at the nationals.

#1 Granada Hills Charter High School, CA (7750 award points) – unlike the other California state winners, Granada Hills High School has had most of its top placements clustered in the last 10 years. This squarely puts it as our official #1 most powerful US Academic Decathlon school (though by award points, it is actually tied with El Camino Real that is only not here on the list due to the technicality of the “Dynasty” definition and the structure of the intense state-wide California tournament. Still, Granada hills has been a truly impressive school in the Academic Decathlon taking 7 out of the last 9 first place rankings at nationals.

While many teams have made it to the national finals for Academic Decathlon over the past two decades, the story of dominance in this competition is clear. California teams rule the roost. The level of the state-wide competition between California teams has not yet been met by any other state – as is evidenced by the fact that whichever CA team is at nationals, they tend to take 1st place. One other interesting point to watch for next year is the incredible rise of Oakwood High School. They have been on a steady increase in their points and placement since 2009. Now with two years of 2nd place under their belt, are they ready to knock off the champs next year? It will be a great possibility to watch for!

Finally, we would like to pose a question. Given how one sided the USAD has been toward CA, is such domination of the national level competition good? With the incredible stranglehold of California schools on the top ranks of Academic Decathlon, is there something that should be done at the state or national levels to level the playing field at all? We’d love to hear your comments.

For more detail on Academic Decathlon see their website.