CyberPatriot dominance & dynasties: analyzing the teams to beat from the 2019 power rankings!

In April 2019, the Air Force Association’s 11th annual CyberPatriot National Youth Education Program crowned its champions from a whopping 6,387 teams (5,144 high school and 1,243 middle school teams). CyberPatriot students are put through a series of grueling rounds where they have to identify vulnerabilities in virtual computer operating systems. The competition was more intense than ever having added nearly a thousand new student teams since the previous year’s competition.

We took a look at the past 8 years of CyberPatriot competitions to analyze who the standout groups have been and to see if we could glean any interesting information for teams planning to compete next year. What we found was unprecedented! 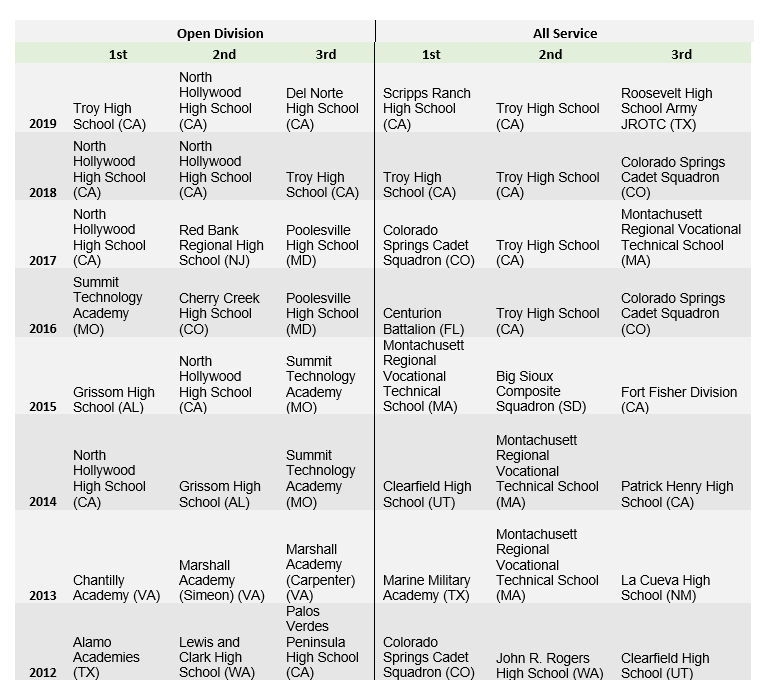 For the second year in a row, California high schools dominated the top divisions taking 5 out of 6 awards. In both the 2019 and 2018 competitions, California High Schools took all but one of the top awards across the two divisions, demonstrating their complete control of the CyberPatriot field.

However, it wasn’t always like this. Although California schools have made it to the podium in earlier years, they were not always as imposing of a presence on the leader board. California has only recently staked its claim as the sole dominating state. We can see this in more detail using the Institute of Competition Sciences’ Award Points System. ICS assigns 1000 points to 1st place awards, 750 to 2nd, and 500 to 3rd placements. The table below lays out the whole landscape of CyberPatriot awards over the past eight years.

Fourteen states have had high schools make it onto the CyberPatriot podium. Thirteen of these states are all within a thousand points of the next rank up or down. This means that with just one award in a future competition, they could move up (or down) the ranks. However, California’s imposing dominance is impossible to ignore sitting far atop the CyberPatriot state rankings. 10,000 points separates California from the 2nd ranked state (Colorado) while no other states have more than a 1,000 point difference between their place and the next place up or down in the ranking.

What does this mean outside of the glaring fact that California has become a CyberPatriot beast? For one, it would take the 2nd place state (CO) at least 3 years to un-seat California teams. And that is if Colorado teams won every award for the next 3 years and CA teams took none. This is great to know for people with a lot of state pride, but it doesn’t tell us much about what has happened at the individual school level, and that’s where the interesting information lies for those who are looking at upsetting the leaderboard in next year’s competition.

When we break things down to the school level, we get a more clear and informative picture of how the state level rankings come to be what they are over the years. The table below includes all of the high schools that have scored over 1000 ICS points (i.e. a 1st place award, two 3rd place awards, or other higher combinations) in their CyberPatriot competitions between 2012 and 2019. 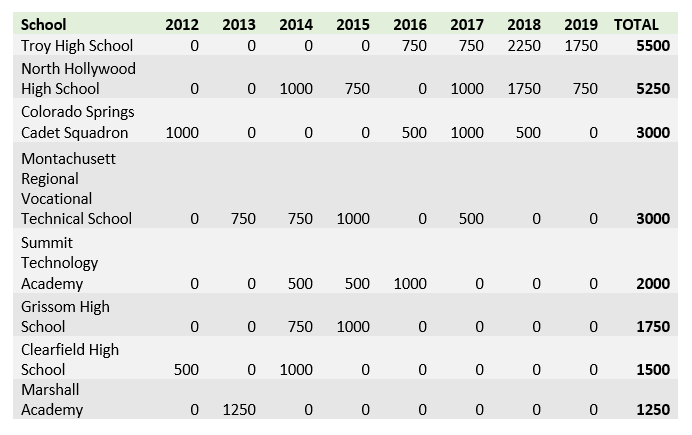 Here we can see a more granular picture of dominance not just from a particular state, but from particular schools. One of the most interesting things about this picture is that the dominant school has changed over the years. Troy High School, which has been the dominant school over the past 4 years, was no where to be seen on the CyberPatriot podium the four years before that. Whereas, North Hollywood’s podium performances have been spread out from 2014 to 2016, and Montachusett was a regular presence on the podium in the early years.

One final way we wanted to explore CyberPatriot dominance is to look at four-year averages for the top teams. Given the fact that students come in and out on four-year cycles in high school, it is logical to think that a team’s performance could change significantly due to an exceptional student coming in or leaving on a similar time scale. Taking a look at the four year average helps us see if this is the case for a school, or if they have dominance lasting more than the 4 years.

The averages also help demonstrate dominance that is due to more than just a few 1-year blips on the podium. The chart below graphs the four-year ICS award point averages for the top 5 teams across the history of the CyberPatriot competitions – the only teams that have received 3 or more awards over the years. 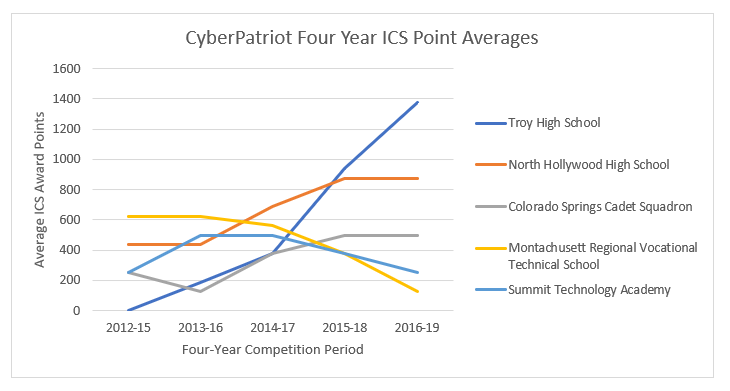 From this information we can gain some great insights about how CyberPatriot teams have dominated in the past, and what that might mean for the future. Here are our top 5 schools in our 2019 CyberPatriot Power Ranking:

Honorable Mention: 2019 was a year for underdogs!

Even though some familiar names remained dominant in 2019, there were strong signs from three upstart high schools that the dynasties may be in jeopardy in the near future. Del Norte High School, Scripps Ranch High School, and Roosevelt High School all showed up on the podium for the first time in 2019 (with Scripps taking one of two 1st place awards out of the hands of our top dynasties). Does this mean one of these underdogs might be ready to start a multi-year run of their own? We'll see when the 2020 season gets rolling!

#5 Montachusett reigned early, but has fallen in recent years.

Between 2012 and 2015, Montachusett Regional Vocational Technical School was a dominating presence on the CyberPatriot scene reaching the podium in 3 of the 4 years in which they picked up two 2nd place and one 1st place finishes. However, from 2016 to 2019, they only reached the podium once with a 3rd place finish in the 2017 competition. With our knowledge of how performance can follow 4 year cycles, is Montachusett ready for a resurgence in the next couple years?

It's been 3 years since this school made the CyberPatriot podium; however, in the 3 years before that Summit Technology Academy was a powerhouse! They are just one of 5 schools to have a 3 or more year run on the podium taking 3rd place in 2014 and 2015 and gaining the #1 spot in 2016! While this school hasn't been on the podium since, they remain one of the powerful teams to watch for the future.

In any normal year of the CyberPatriot competition, Colorado Springs Cadet Squadron would be spoken of as a top “team to beat.” From 2016 to 2018, they didn’t miss getting on the podium, taking down one of the two top spots in 2017. Their performance was only overshadowed by the dominating performances of our #2 and #1 ranked schools. If we looked at just an individual division of CyberPatriot, Colorado Springs Cadet Squadron would be right in the hunt for the top rank because all of their awards came from just one division. So even though they didn't make it in 2019, we cannot count them out for a resurgence on the podium in the coming competitions!

#2 North Hollywood High School has had the most staying power.

Over the course of CyberPatriot’s last eight years no team has had as much staying power as North Hollywood High School. They did not place in 2016 but have reached the podium every other year from 2014 to 2019. A feat no other school has managed! What’s even more impressive, is that unlike Troy High School, North Hollywood had to earn all of their awards in just one division – not having any “All Service” category teams. So, on a per-division basis, North Hollywood may be considered the most dominant team. Like Troy, their peak performance was also in 2018. Will their staying power continue in future competitions?

The sheer amount of placements that Troy High School has earned the past two years has put them literally in a league of their own. Never before in the history of CyberPatriot has a single team achieved such a dominating performance over other teams. What makes this even more powerful is that it has lasted multiple years. However, their peak performance was in 2018 taking home two 1st place and one 2nd place awards. In 2019, they fell slightly picking up a 1st place and 2nd place award. Does this mean that Troy’s dominance is on the wane?

Each year CyberPatriot provides a thrilling competition to see which teams of high school students are poised to be the future cyber-guardians we need. The competition is never dull. Looking at the past performances is a great way to explore which teams have historically risen to the top, but it does not predict who will take the championship next year. Any number of the 6,000+ teams could step up to the podium in the 2020 competition. It’s going to be an exciting season to see if the dominant CyberPatriot dynasties can continue, or if an underdog can shake up the leaderboard next year! Will your school be in the hunt?