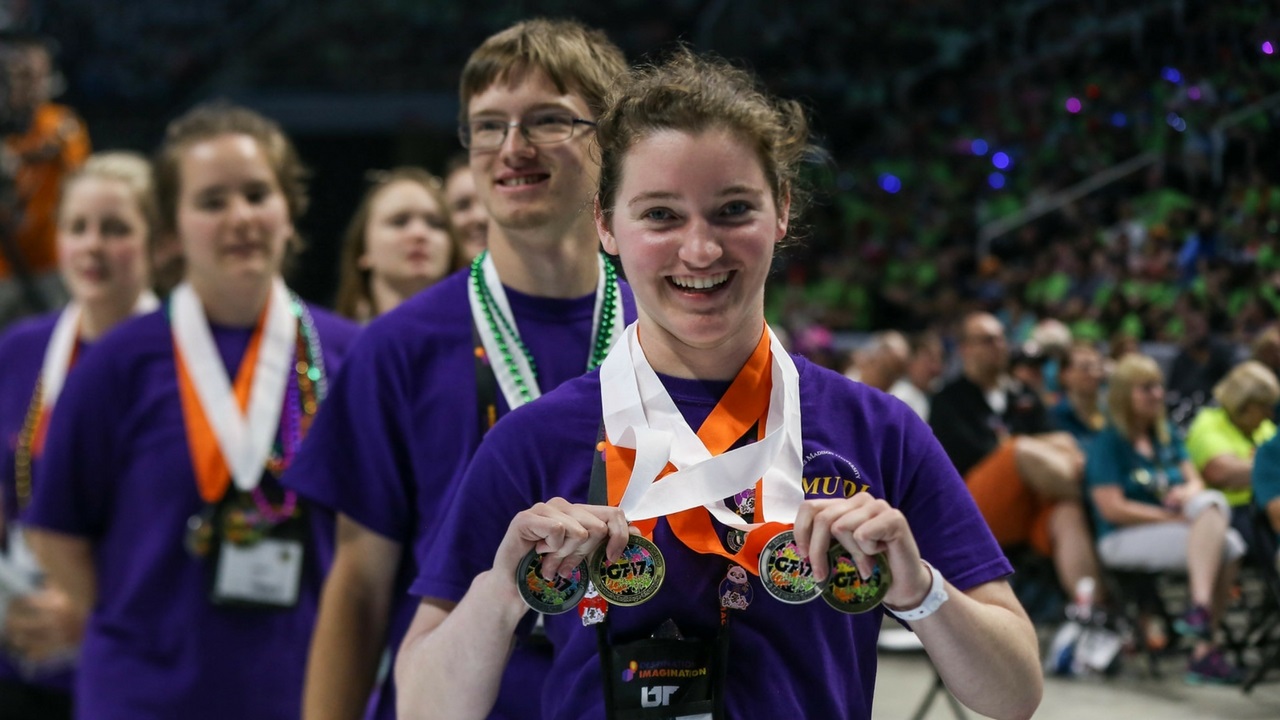 On May 24th, The world’s brightest scholastic stars and cognitive athletes descended on Knoxville, Tennessee to compete for Destination Imagination glory. One team of sisters from the suburbs of Detroit put it all on the line to see if they could beat out the established teams to make it to the podium.

At Destination Imagination’s annual Global Finals, teams of the most creative students from around the world applied their brains to a new set of challenges that would leave most of us scratching our heads and feeling as though we had nothing more than a mashed potato upstairs.

But this was not so for the ‘Twisted Sisters’ – Michigan’s premium all-girl engineering team, made up of sisters Isabella and Iliana Cosme-Brooks from Holt Junior and Senior High School on the outskirts of Detroit, USA.

After showcasing their skills and breezing through the regional tournaments, spectators were undoubtedly thirsty to see how these two humble sisters would fare in the Grand Finale in Knoxville. Especially given that they would be up against many other illustrious schools from nations around the world.

However, before they even arrived, the Twisted Sisters were facing a big challenge. One of the requirements of Destination Imagination is that teams fundraise part of the money required to attend the final program. For the “Twisted Sisters” raising the funds was not a simple task; especially coming from one of the lower-income, lower-economic status areas outside of Detroit. Their school and community simply weren't able to do enough to get them to the finals on their own. But after trying every way they could think of to raise the funds, the Twisted Sisters were pleased to hear that they would be the recipients of a Destination Imagination partial scholarship, and thanks to this support they were on their way to the finals!

In it all the way.

So, there they were. Two lone sisters from the suburbs of Detroit in a sea of 17,000 attendees, from over 15 different countries, poised to take on Destination Imagination’s 2017 “In it Together” engineering challenge. As the “ball” dropped, kicking off the finals the crowd roared with elation; cheering for their team. The ‘Twisted Sisters’ shrugged off the distractions all around them and focused on the job at hand, toiling on the engineering challenges ahead of them. If you want to inspire young girls in your family, school or university to step up and follow their passion for STEM, then look no further than the ‘Twisted Sisters’. The girls did exceptionally well.

The ‘In It Together’ engineering challenge required teams to design, build and test multiple free-standing structures that work together and then develop a strategy for using these structures to support as much weight as possible. According to Destination Imagination, the girls “successfully created a freestanding structure to hold a total of 480 pounds.” In addition, “they created a device made with wheels, wood, power drill and pulleys to successfully lift, move and place the weights onto the designated structure” because they were not able to lift the weights themselves!

Their amazing structures and designs, along with their original, innovative and creative approaches to the other aspects of the challenge, saw them finish 15th overall out of a field of 63; which although not on your standard award podium is still an outstanding achievement. Not to mention, in doing so, they triumphed over some of the more obvious favourites to make it into the top 15 teams.

It’s worth mentioning too, that in the ‘Instant Challenge’ component, where teams engage in a quick, creative and critical thinking task in which they must produce a solution to a complex problem in just five to eight minutes, the girls scored higher than the top 3 place getters. They were awarded a total of 77.81 points, whereas the first, second and third place getters overall scored 72.19, 76.97 and 71.63 respectively. Unfortunately for the girls, the ‘Instant Challenge’ component only accounts for 25 percent of the overall score.

The ‘Twisted Sisters’ are truly an example of determination and grit; championing the cause for girls and women in STEM. Despite, being up against Goliath-like counterparts, the girls drew up the battle lines and ran head long into the challenge at hand. More than just experiencing success on the day, they have succeeded in inspiring a generation of girls to pursue their dreams and aspirations.

This was one of many intriguing stories that came out of the Destination Imagination 2016-17 season. And many couldn’t help but ponder over the possibilities that await the Twisted Sisters and the thousands of other teams in the next season of DI. We'll be watching to see all the amazing feats of creativity and academic excellence coming along next year. Be sure to stay tuned for more excitement as the 2017-2018 season gears up!