The 2017 VEX Robotics World Championship: An Underdog’s Run for the Top 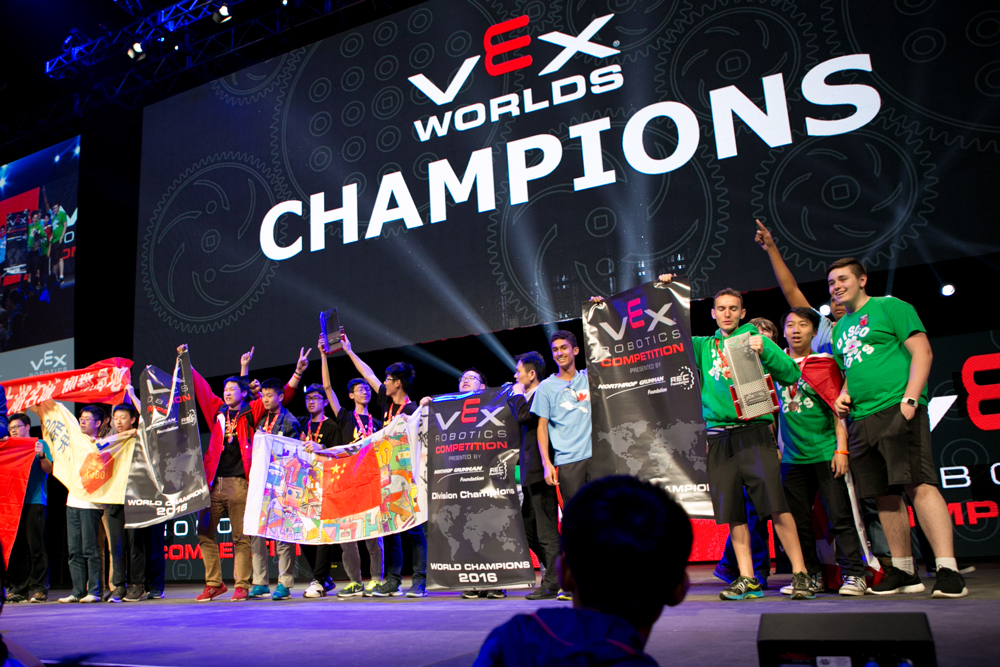 Last month, robotics lovers and STEM enthusiasts from around the globe watched the CBS Sports Spectacular coverage of the 2017 VEX Robotics World Championships, where one small-town team made an inspiring run for the top.

Each year thousands of students from around the globe convene for the VEX Robotics World Championship, seeking to take the crown of top student roboticists.

This year, one small-town team stole everyone’s attention; the Trojan Knights. Made up of students from the modest, unassuming Cumby High School from the rural town of Cumby, Texas, USA, the Trojan Knights were at a disadvantage even before they started. With only 750 people in the entire town, Cumby High School was under-funded, under-staffed, and out-gunned in nearly every respect. However, despite their humble roots, this dedicated team gave even the top dogs a run for their money on the world stage!

A 7-3-0 win-loss-tie record in the qualifiers was enough to see the Trojan Knights move into the Divisional Finals. In the Divisional Finals, teams form a new alliance with two other teams for the remainder of the tournament. The Trojan Knights were now underdogs in more ways than one because they were up against newly formed alliances made up of some of the strongest teams.

One opposing alliance contained the “Trinity Dragons” and “Magic” in their line-up, who were the number one and number three ranked teams going into the divisional finals with win-loss-tie records of 10-0-0 and 9-1-0 respectively. But this was no deterrent to the Trojan Knights.

With a little bit of ingenuity and strategic planning, the Trojan Knights’ alliance defeated the top seated Trinity Dragon’s alliance in just two matches! They then went on to upset two more alliances on their way into the Finals – losing only one match throughout the entire process. Unassuming Cumby, Texas was now firmly on the map having taken the “Research” division top spot.

A New Challenge in the Championship Finals

After taking out the division, the team from Cumby faced new challenges going into the Championship final round. The competition was becoming fierce, especially now that they were up against the winners of all the other five divisions, the cream of every divisional crop. Unfortunately, this was where the Trojan Knights ran into a wall. A wall made up of the stellar teams from the Engineering and Maths division champions.

The Trojan Knights ended their run in the finals with a win-loss-tie result of 3-2-0. This unfortunately, was not good enough to see them reach the Championship Grand Finale – the final round between the two alliances with the best records. That honour went to the Maths and Engineering division winners. However, the fact that the team from a town of just 750 people showed up in the World Championship at all, is quite a feat in its own right. This demonstrates that it’s not all money and size that contribute to success in robotic competitions.

With the surging underdog Trojan Knights finally out of the way, the Championship Grand Finale came down to the top dog alliances from the ‘Maths’ and ‘Engineering’ division winners. This showdown left spectators absolutely stunned. Based on their performance in the lead up matches, the ‘Maths’ division champions, an alliance made up of ‘Phantom Robotics’, ‘X.Robo-Hefei No.1 HS-B’ and ‘Shocks’, were the heavy favorites to take the title.

However, it all seemed to be going wrong for them after the first match. Due to a poor strategic decision, and some driving errors, they were trounced in the first round, 47-0. Surely the favorites to win it all were not about to go down in two! But after an amazing performance and strategic masterclass from the ‘Engineering’ alliance, the second match saw the ‘Maths’ divisional champions go down 28-18. Clocking up that second win meant that it was the ‘Engineering’ division winning alliance who were crowned World Champions at the 2017 VEX Robotics World Championships!

So, even though team ‘Trojan Knights’ didn’t make it all the way through to the Grand Finale, their performance lifted them to a Divisional Championship; which was an incredible accomplishment and a testament to their determination. Their run for the title only ended when they went up against the two first place alliances from the Divisions ultimately in the finals themselves.

It’s not very often that a school from a town with a population of a little over 750 people can compete on the world stage and triumph over much bigger, well-funded schools. Remember, there are no size divisions in Robotics Competitions like there are in high school sports.

After reflecting on the action in Louisville and licking their wounds, many of the teams that competed in this year’s World Finals will undoubtedly be back again next year. Armed with experience, fresh strategies and vastly improved robots, they are sure to be ready again for their shot at the 2017-18 VEX Robotics World Championship. We can’t wait to see if Cumby High School will again take aim at championship glory next year! And maybe this time, they’ll be able to take it all the way.

The start of the Robotics season is just a few months away! Stay tuned to ICS for more news and analysis.